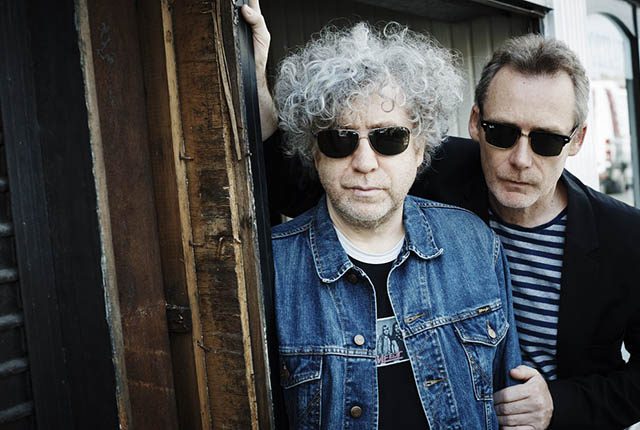 In 1985 The Jesus and Mary Chain, founded by Scottish brothers Jim and William Reid, reached instant fame when launching their debut album Psychocandy. But it weren’t the tunes people talked about, but the distortion that covered them. Darklands, their second record, was meant to uncover these tunes once and for all. The ‘album of songs’ will be played in full during the upcoming tour. Leadsinger Jim Reid takes us back to the darklands of the ‘bad old days’.

Hester Aalberts | Photograph Courtesy of The Jesus and Mary Chain

Why celebrate Darklands thirty-three years after its release?

We already did a Psychocandy tour and people started to ask if there would be a Darklands tour as well. The timing may not be very logical, but who cares?

According to many, Darklands is the best album you ever made.

Personally, I do not have a favorite. Psychocandy and Darklands both turned Gold, but I think Munki was a good record as well. Apparently I was the only one with that opinion, because nobody bought it.

What was your ambition with the usually somewhat ‘difficult’ second album?

We were rather nervous about how to go forward. Some people suggested we might just as well split up. After all, how could we possibly surpass Psychocandy? But although there was a strong sense people wanted more of the same, we definitely didn’t want to make another Psychocandy.

Were you frustrated so little was said about the tunes underneath the distortion? Is that why Darklands hardly has any noise?

Exactly! It defined our blueprint of Darklands: this time we wanted to uncover the tunes, to take the noise off and make this a song album. So instead of making Psychocandy 2 we did quite the opposite.

Did you and William really flip a coin to decide who would be leadsinger?

Yes, that is what actually happened! Neither of us wanted to sing. We were both painfully shy and terrified by the idea. I lost the toss so here I am.

Was the distortion something to hide behind, like the dimmed lights and the excessive smoke while performing?

I always used to scream at the light guy: ‘It’s too bright on stage! Turn down the lights!’ I felt I was okay as long as people couldn’t see me. But I watched some YouTube clips and realised the audience couldn’t see us … at all! So I stopped yelling at the light guy. After all, people are paying to see us.

Psychocandy brought you world recognition. Still you came across as bored and desillusioned, like you couldn’t be bothered.

I wasn’t comfortable with the celebrity thing. In my early career I thought it wasn’t good enough to just stand there and sing. I had an unrealistic idea of what I ought to be: this super animated, super punk. So I adopted a persona, a cartoon character that represented me in the band.

To be honest, we were genuinly bored sometimes. Being in a band is not like you think it is. People think touring the world is interesting, but in fact it is boring as fuck. Most of it is dressing rooms. We didn’t see much of the glam. So we were indeed losing interest at some time.

Does being the lead singer still terrify you?

Not as much as it used to. The simple reason is I don’t try so hard anymore. I now realise it’s all about the music. I don’t need to be Iggy Pop or Johnny Rotten. This realisation took me a long time. So now I go out there and sing the songs as best as I can. And I try to ignore the fact there are people watching me.

Is it scary to see all these faces looking up at you?

It can be! I suffer from stage fright and I am always extremely nervous the hour before the show. The first song I am sometimes visibly shaking. For years I only performed when drunk. The first show I played sober was the night before Coachella. And Christ, it was terrifying. I haven’t touched a drink for over three years now.

On Darklands you and William both sing different songs. Did you write the album together or as individuals?

We don’t often write together. We do occasionally, but who sings what song has got nothing to do with who wrote it. William actually did sing some songs on Psychocandy, but we’ve got very similar voices so nobody was really aware of it. William and I still can’t tell which of the songs he sang.

The increasing friction between you and William is no secret. It even caused the band to break-up in 1999. What happened?

To be totally truthful, I am not sure. It was a gradual thing. At first we were each other’s best friends and used to spend hours talking about anything. We were always pretty much in agreement. Sometimes we did have arguments about the sound of the band, but those were always constructive and forgotten about within ten minutes. But somewhere along the line, between 1985 and the mid-nineties it seemed to disintegrate. So it wasn’t an overnight thing; it just sort of happened.

What triggered the actual break-up?

The situation became intolarable. We couldn’t even be in a room together without screaming at each other. By 1998 we were arguing about everything. Not just music, but everything. By that time the management should have realised we had to get away from each other for a certain amount of time. Six months, maybe a year. I am sure the band would have survived a time-out. But instead we took a world tour, found ourselves on an American tourbus and nearly killed each other. It all became so fucking intense. William left. I finished the tour with the understanding the band would be over.

In 2007, eight years later, The Jesus and Mary Chain regrouped.

We didn’t talk for a long time. But after a while you start to reflect on things. I realized a lot of the issues we had were petty and trivial. We started talking again and the idea of playing in The Mary Chain didn’t seem so hideous anymore. We still argue but it is nowhere near like what it was in the bad old days.

The touring went fine, but making a new record was something else. The painful memory of recording Munki made me put it off for ten years. But eventually I thought: ‘This is what bands do. They make records and if we don’t make another record it all seems rather pointless. So fuck it, let’s go and do it’.

Strangely enough it was the recording of Damage and Joy that brought us back together properly. We actually bonded.

But on Damage and Joy you still sing ‘I hate my brother and he hates me’.

That’s playfullness! But sometimes it’s true. In a way it is the dynamic of the band. The friction between us causes a lot of what is good about The Mary Chain, what makes it work. And let’s face up to the facts: it’s never going to be completely harmonious between us.

Jesus turns up quite frequently in the lyrics of The Jesus and Mary Chain. Are you a religious man?

Do you believe in a hereafter?

Logically I have to say; it’s lights out when you die. That’s it. But who knows? I have taken acid trips in the past and know you can go somewhere that is not of this world. So maybe you slip into an eternal acid trip. I don’t know.

How did you come up with the name of the band?

First we had some really shitty names. The Daisy Chains for example; dreadful! But we couldn’t get a gig anyway, so … When we finally did manage to get one, we needed a name straight away. It was William who said: ‘What about The Jesus and Mary Chain?’ And we were like: ‘That’s fucking …, that’s fucking genius!’ It didn’t sound like anybody else. It annoyed the fuck out of us if someone would call us Jesus and the Mary Chain. Sometimes people still say it.

Can you reveal something about the setlist of the upcoming tour?

The plan is to do two sets. One would obviously be Darklands and then we are planning to do another one of about the same length with songs from the same period. Perhaps B-sides and a couple of hits as well.

There has been mentioning of a new studio album. Will we hear any new songs?

We’ve recorded a bunch of songs, but nothing is finished. And we want to record some more. The idea is to have an album out this year, but I am not sure if we are going to make it. So who knows: we may include a new song. That is something we will talk about during rehearsals.

Rumour has it the album will be different. More adventurous.

Well, we are using a lot of old analogue synthesizers, so, yeah, it will probably sound a bit different.

Can you tell me about the rediscovered live recordings from St Andrew’s Hall, Detroit, dating back to the original 1987 Darklands tour?

I forgot those existed! It was Warner that came up with them. They found them somewhere gathering dust in the vaults. They sounded pretty good.

Can we expect an album of these recordings on the merch table during the tour?

Maybe. I really don’t know. I do suddenly remember a weird thing about that gig though. It was a perfect Spinal Tap moment. When we left the stage and walked into our massive dressing room there was a wedding reception going on! We stood there all sweaty, staring at a bride and groom cutting their wedding cake. They all looked at us like: ‘What the fuck are you doing here?’

Your tour starts March 20 at The Barrowland Ballroom in Glasgow. Will you record a live album of Darklands there, as you did before with Psychocandy?

There’s no plan to do so, but who knows. If somebody records it … I don’t see why not.

The band was formed in 1983. Did you expect you would still attract such a large audience?

At that age you don’t think ahead very far. In the beginning we were making music that we wanted to last. We wanted people to listen to Mary Chain records ten, twenty, thirty years in the future. Did we think we would still be out on the road touring? No. I couldn’t have imagined that.

You will be in Amsterdam on March 29th. Do you have special memories of Amsterdam?

Come to think of it: yes! I once left my black suede creepers on the balcony of the American Hotel. I’ll go around and ask if they have found them.

The notorious interview with Bart Peeters still haunts you. Enough has been said about you insulting Joy Division. But you also said you wanted to educate people.

Oh God, I have nothing to teach you. But when you are young you think you know everything. As you get older, realisation kicks in that you don’t know so much at all. I guess it is wisdom with age to know you’re not wise.

Can we look forward to the Automatic tour already? Next year seems logical: thirty-three years after its release!

There is no plan. But never say never.

Are we actually going where the darklands are? In other words: do you think this tour is going to happen?

At the moment we are proceding as if the tour is going ahead. I don’t know what will happen. Hopefully everything will be okay.