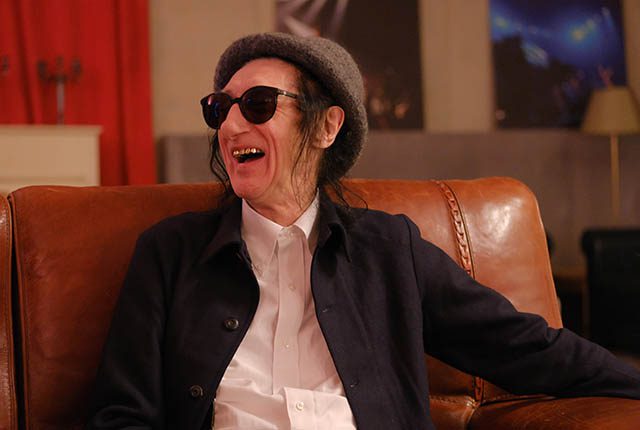 Paul McCartney claims he is the best poet of the British Isles. And recently ‘the bard of Salford’ received an honorary doctorate for his influential oeuvre. With his razor-sharp pen and his satirical texts, in which the word fuck cannot be missed, Doctor John Cooper Clarke (70) takes a grain of salt with everyone including himself. ‘Get back on drugs, you fat fuck.’ No wonder the punk movement embraced him: he used to be the supporting act of Siouxsie and the Banshees, The Clash, Buzzcocks and The Sex Pistols, among others. No more supporting though: nowadays he is the unmistakable headliner.

The concert hall is packed with a mainly English-speaking audience. John Cooper Clarke has been firing his rugged writings into his audience for five decades now. And he is virtually unanimously hailed by both press and public: The pride of Salford, An absolute genius, The Rolling Stones gave birth to a comedian poet.

Thin as always and traditionally garmented with a tailored black suit and pointed shoes, he enters the stage. ‘In the early days of punk, I was pelted with beer and bottles so often that I put on a leather jacket. I couldn’t afford to have my suit dry cleaned after each performance’, he explains later.

On stage, he shines and sparkles with incredible ease. Every time he launches another word missile, the audience responds exuberantly. No wonder: his work has reached an almost legendary status: Belladonna is your flower, manslaughter your meat, spend a year in a couple of hours, on the edge of Beasley Street.

JCC, with woollen cap, visibly enjoys himself and shares spontaneous laughs with his audience. In Mancunian and with a slight hiss – most of his own teeth are replaced by gold ones – he effortlessly builds bridges between the poems. His previous heroin addiction is a recurring theme. ‘I didn’t want to quit at all!’, he claims. Back in the days he briefly shared an apartment with Nico, muse of The Velvet Underground. ‘There was no romance involved. We were both junkies, so we had other things on our minds. ‘

After the encore, his – also legendary – tour manager Johnny Green guides him off the stage. During a previous telephone conversation I already noticed Green guards his fragile artist like a tiger. And when I call him after the performance he asks for a brief moment, so the poet can catch his breath. Rightfully so.

Backstage Cooper Clarke, seemingly tireless, is mingling with a dozen of his loyal fans. Only after Green has cleared everybody out of the room, the poet falls down on the leather couch with an audible sigh. ‘Sorry for this, I’ve got a bad ankle.’ His tour manager, routinely and almost unnoticed, hands him a drink and gives me half an hour.

Touring can be exhausting. How do you cope?
I’m okay, I would say. I’ve got my guy drive me from door to door, I stay in top flight hotels and play at nice theatres all over the world. And you know, you gotta do it if you don’t feel like it. It’s a profession like any other. But all in all, I love being on the road. I do work in chunks though: September, October and November are pretty solid but around Christmas I always take a break. Than I work a hell of a lot in the new year and by summer my wife Evie and I go to my sister-in-law Arlette and her husband in France. 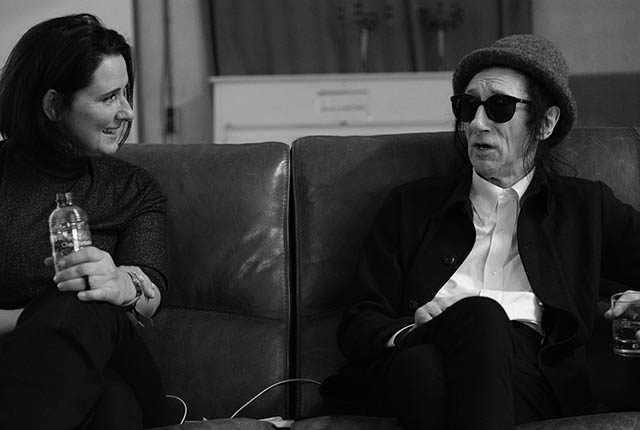 Your new collection of poems is called The Luckiest Guy Alive. Are you?
Actually, yes. Do you know The Double Life of Henry Phyfe? It’s an American sitcom from the sixties, in which the accountant Henry leads a double life as a CIA spy. It perfectly describes the way I view my professional side and my domestic side. These have always been very separate. I guess you have to actually live a life like anybody else to be able to write it.

I wouldn’t say I have lived a life like anybody else though. For a start, I am an agoraphobic, so I never leave the bleedin’ house (laughs). I like watching the television. Anything in life that doesn’t involve sitting in one spot I am not interested in. I am very inactive. Sometimes people describe me as an activist. Well, that’s a dirty stinking lie. I’ve never acted on anything in my fucking life.

A performance takes me about seventy minutes. When it comes to energy I am always on the edge of extinction. I’m always about to run out. Being on the stage, for me, is kind of a freak situation. It’s worth the admission price for that fact alone!

How about your ever increasing popularity? Your latest book is a success, performances are sold out and everyone loves you.
I think that’s incredible! When I started out, there was no scene for poetry. I single-handedly created the whole platform for myself and for the up-and-coming poets. Actually, for the first time in the history of showbusiness, we had a touring group of poets putting on show after show, night after night, in large theatres, The London Palladium for instance, The Queen Elizabeth Hall, The Royal Festival Hall and The Royal Albert Hall. I can’t think of another time when an evening with poetry would fill such large spaces.

The more amazing if you realise not long before that people threw bottles at you while performing.
Yes, well, we got that unpleasantness out of the way early on. But I do realise the appropriateness of poetry in such a hardcore situation is what got me noticed in the first place. Even though it was unpleasant, in the end it worked in my favour. I might have complained at the time, because I had to give up on wearing my tailored garments. They don’t come cheap, you know. Therefore, on lots of pictures taken in the eighties you always see me wearing the same black outfit; a pair of jeans and a Ramone-style motorcycle jacket. Simply wiped clean with a wet cloth.

How did you get involved with the punk movement? In a broadcast on BBC Radio 4, they asked you which songs you would take to a desert island. There was no punk track among them.
My taste in music had been long established before the event of punk rock. The punk movement was a kind of a mixed media event, that involved cutting edge graphics, garment design and haberdashery. It was as much a look as it was a kind of music. I got involved via The Ramones. I saw it as returning to the core values of rock ‘n’ roll, finally, after all that ridiculous music by the likes of Jon Hiseman’s Collosseum.

Does that have to do with the lyrics?
Yes, you hit on it! In the punk world lyrics suddenly became very important, whereas in – for example- the heavy metal world lyrics were just second consideration. But when you look at the words of Johnny Rotten, Joe Strummer, Glen Matlock and The Ramones, … there is a very sophisticated word smithery in those songs. You’ll find a great intelligence at work in the best of punk rock. People suddenly started paying attention to the lyrical content. The song Anarchy in the UK from The Sex Pistols is a good example. It tells a story, it’s like a little vignette of London life. Punk made better lyrics universal and made the public more amenable to them. In hindsight that is punk’s greatest victory.

I spoke to Hugh Cornwell [red: former Strangler frontman], two weeks ago. In 2016 the two of you made the album This Time It’s Personal together.

Ah, H! Did he tell you the story? It is very interesting how that whole thing developed. In fact, the album is the result of a misunderstanding. Hugh expected me to read Jimmy Webb’s Macarthur Park like a poem. The song is very arcane and you can’t really know what it’s about. Many people assume the lyrics were written under the influence of psychedelic drugs and that it was merely a narcotic influenced poetic exercise. I had never really listened to it very carefully. But I had to if I was going to recite it. When I looked at the lyrics of that song and to the words Jimmy Webb had chosen, I came to the conclusion they had to be sung. They are so banal in a way. There is no florid language in it. I recall a yellow cotton dress. How do you speak those words? Someone left the cake out in the rain. You are in danger of sounding like Captain Kirk doing Lucy in the Sky With Diamonds like it was Shakespeare. I didn’t want to make a laughing stock of myself. Hugh was quite surprised, because he didn’t expect me to sing. But I can carry a tune. I love to sing! So in the end we made a whole album together.

The reviews were great.
Not universally. Someone said I was no Pavarotti. It never stops hurting!

JCC seems to be full of surprises. Do you have anything else up your black sleeve?
Absolutely. I’m in the middle of writing my memoirs. Right now I’m up to 1976. I will also reveal the title: I want to be yours. It will be published by Picador, just like my last book. It should be out next year.

Manager Green indicates that time’s up. JCC apologizes for not getting up from the couch. ‘Thanks, Hester, for taking the trouble to interview me.’

Everaldo Pechler, booker and promoter of Q-Factory, walks us to the exit. He solemny says: ‘Do you realize you have spoken with a legend?’ Hell yes, you bet I do: I’m no twat!