Home music Original Jesus and Mary Chain drummer: I was an outsider 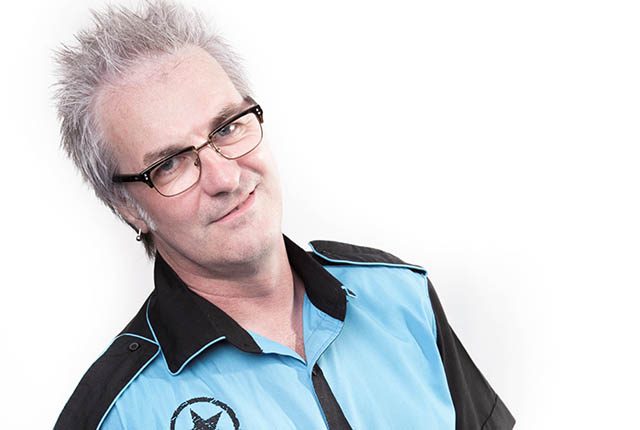 EAST KILBRIDE | Murray Dalglish was only sixteen when he responded to an advert of the Reid brothers, pinned on the bulletin board of the local record store in East Kilbride. He dragged his full drumkit to the local community centre for the audition. William Reid thought he was nuts: ‘Who does he think he is … Neil Peart?’ Dalglish was hired regardless and became the first ever drummer of The Jesus and Mary Chain. Six months later he quit.

How are you coping in these scary Corona times?
Last Saturday we closed UrbanChic, our hair salon in East Kilbride. It was a hard descision to make, but a necessary one. After all, each and everyone of us can be a carrier of the virus without knowing it.

You never left East Kilbride.
Actually, I did. At least for a short while. My wife is Belgian so I spent some time in Kortrijk. East Kilbride is not a bad place to live, not half as bad as Jim and William made it out to be. At least, not anymore. Instead of emerging gradually, this town was designed on paper. Therefore, back in the eighties, it was rather a clinical town with a lot of concrete. And indeed pretty boring.

Depressive towns are often breeding grounds for musical talent.
That’s true! ‘Happy When It Rains’ might well be a derivation from that! We were often forced to stay indoors – like we are now – and had to make our own entertainment.

When and why did you pick up drumsticks?
My father was a drummer and gave me my first drumkit when I was about twelve. Later on, I ended up playing in a rock band called X Offender, named after the Blondie song.

What sort of music did you listen to back then?
That would have been The Damned, The Sex Pistols and The Clash. And later on also glamrock bands like Hanoi Rocks. I never stopped listening to The Ramones.

Can you describe yourself in 1984. Did you stand out in the crowd with your big black hair?
I had a lot of friends that looked pretty much the same. We were fresh out of school and went out a lot. We even frequented some clubs in Glasgow.

Did you know the Reid brothers existed?
No, I didn’t. I had never seen them on the streets … ever! I don’t believe they went out much.

How did you end up as their drummer?
I saw an advert in the local record store and called them. They invited me for an audition. I took my complete drumkit with me. The brothers were definitely shy. Douglas was more outgoing. We started to play and it was basically a lot of noise. William said: ‘Who does he think he is with all those drums. Neil Peart of Rush?’ There was never any proper rehearsal, not even before our first gig in The Living Room. William just plugged in and played. And I joined in.

I went to their house on my motorbike on a few occasions. They lived on the other side of town. We would sit in their bedroom. They hardly ever quarreled back then. Looking back I sometimes think the stories about the brothers fighting were blown out of proportion. I can imagine though that after years and years of being on the road hate gets involved. But back then they had normal brothers’ quarrels.

You were by far the youngest.
William is nine years my senior. But I had been going out to nightclubs ever since I was fourteen and they hadn’t. They got drunk very quickly.

Brian Young, the current drummer, told me that when he joined the brothers gave him instructions like ‘At that point you just … go mad!’ Did the Reids have more elaborate ideas about drumming back in 1984?
No. I can remember one time William actually told me what to do. We were on a strict deadline and I couldn’t get it right. That was the only time he showed he had a vision of how he wanted things to be. Normally I could just do whatever I wanted.

They did however program the drum machine in a way that some parts were too difficult to reproduce. So I had to make my own interpretation of those. The parts on Darklands can only be played by very skilled drummer. Like Brian. That was one of the reasons I was looking forward to the Barrowlands gig so much: I wanted to hear Brian play Darklands. He truly is amazing drummer.

Bobbie Gillespie is associated with playing the two-piece drumkit whilst standing up. But it was you who introduced this way of playing.
That’s not true. I would have used a full drumkit if it would have been available. And I didn’t want to stand up at all. The truth is I could never bring along my own drumkit and therefore always had to use the one of another band. They never allowed me to play all over their drumkit, so I usually had no basedrum and no cymbals.

What do you remember from the Mary Chains’ first gig ever, in The Living Room in London?
Actually, there were two gigs that night. No one seems to remember that second gig!

We took the overnight bus from East Kilbride to London and arrived at Victoria station very early in the morning. We lingered about a bit, waiting for McGee to pick us up. He first took us to The Living Room. After that gig McGee rushed us off to The Rock Garden, a dark basement venue on Covent Garden that hosted indies bands back then. Nowadays it’s an Apple Store.

You were the only sober musician on stage that night.
That’s probably right. I drank a lot of cider back then. I have never been a big drinker.

You seemed to be the odd one out: you were younger, drank less, had your own friends …
Let me try and explain this properly. [silence] They were a unit, [another silence] and I was an outsider. That’s probably the best way to … I think I would always have been the outsider of the band.

That sounds sad. You were only sixteen!
Jim, William and Douglas did come up to my house before we went to London, to assure my parents they would look after me.

And did they?
Uhmm … kind of. I don’t think I wasn’t looked after. And the boys weren’t as drunk as they were made out to be.

There was one evening though, a couple of days after the gig in The Living Room, when we were scheduled to play in Alice in Wonderland, Soho. Jim had a sore throat and McGee had organised for him to get an injection. Jim had drunk half a bottle of sherry and was a mess, falling about and bumping into things. So later that night we were thrown out of the venue. I was quite upset and kicked against the drumset I had been using from Green on Red. Their drummer towered over me and I thought he was going to punch me in the face. But instead he grinned: ‘You guys were like the damned fucking Sex Pistols!’

It wouldn’t be the last time we were thrown out of a club. Later on it happened again at Night Moves in Glasgow. That was my club!

Did William sing as well during these 1984 gigs?
Yes. Jim and William took turns.

Jim claims they have very similar voices. He can’t keep them apart.
I can. Williams voice is deeper.

Why do you think the band has had twelve drummers so far?
First of all, you shouldn’t count Bobbie. He was never a drummer. He banged on a drumkit, but he was never a drummer [laughs]. And there have been a lot of base players as well, since Douglas left.

Have you seen the picture of me with Brian and Loz Colbert? It was taken at the Barrowlands Ballroom in Glasgow and we were actually talking about a possible reunion of Mary Chain drummers, including the drum machines!

At this occasion I also saw Jim for the first time since 1984. I had met William by coincidence a few years earlier. But I hadn’t seen Jim ever again. I was a bit excited at first, but it felt like seeing an old friend.

Is it true you were kicked out of the band, because your father demanded you should get paid?
No. I wasn’t kicked out. And my father didn’t demand anything. He was merely inquiring. I kind of blew this story up a wee bit.

Why did you leave?
I had been offered an apprenticeship. My father said I could always go back to music.

When you announced leaving the band they didn’t try to change your mind.
They were actually quite upset. It must have been a shock. They had an immediate problem, because of upcoming commitments in Germany.

Do you ever regret leaving the band? They became so succesful.
I was happy for them. I had my new life: a job and a new band that I felt more comfortable with.

Did it ruin the relationship with the brothers and Douglas?
There was no relationship after I left. They moved to London and I stayed in East Kilbride. And there wasn’t much of a relationship in the first place. I was in the band for about six months. That isn’t a long period to get attached.

Do you like their albums?
Very much so! I have all the remastered versions. One of the albums I didn’t know too well was Munki. And now I really love Munki! It’s probably one of the better produced albums. One of my favorite songs is ‘I Love Rock ‘n’ Roll’. I genuinely love that song.

Tell me about your present life.
I am now the drummer of 2Sevens and write quite a lot of the songs. My best friend Andy Mason, who is also in the band, wrote ‘Your Song’. I love it!

I met my wife because she was friends with The Bollock Brothers. She is a hairdresser and we run a salon in East Kilbride. I do the reception, Facebook and everything else that is media related. I help clean up and also change the light bulbs. Our twins, a boy and a girl, are eighteen and still live at home. They started college this year.

Are you proud to be a part of The Jesus and Mary Chain history?
Absolutely! I am very proud of it. And according to Brian [Young] a lot of people remember me rather than other drummers. To hear that from him makes it extra special.

Mary Chain’s Justin Welch: ‘It was written in the stars!’